MIMIC allows rapid prototyping of many publishers with custom payloads
and custom message rates. By simulating thousands of such sensors you
can benchmark your performance with AWS IoT 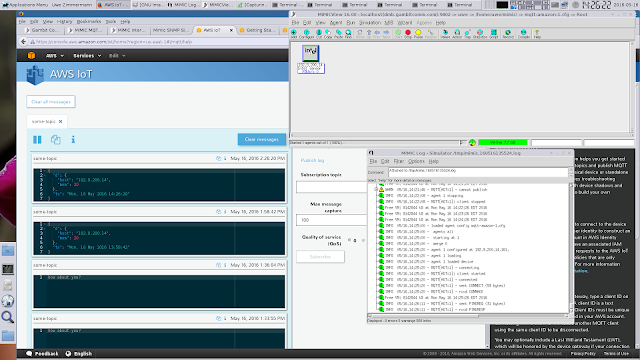 Setting up a benchmarking environment to test the performance
of large-scale IoT applications is specially cumbersome. It needs a large
number of sensors, each with different IP address. Each type of sensor
sends out different messages at different rates and with unique content.

MIMIC MQTT Simulator creates such an environment with thousands of
sensors. In this example we have simulated an Intel sensor that sends
messages to the AWS IoT gateway. You can see in the image that the
messages are received by the AWS IoT subscriber client. The MIMIC log
window shows the connection-related transactions.

This can be easily multiplied to simulate thousands of sensors to create an
IoT lab with the desired variety of sensors. You can use the environment to
benchmark the performance matrix for your IoT applications.
Posted by Gambit Communications at 10:26 AM No comments: