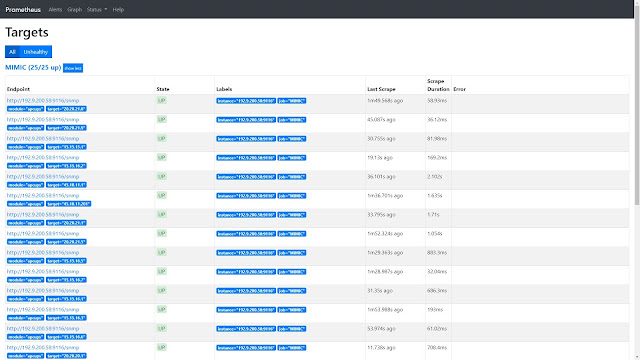 we can monitor network interfaces. The graphing can be
compared to a commercial offering as shown below: 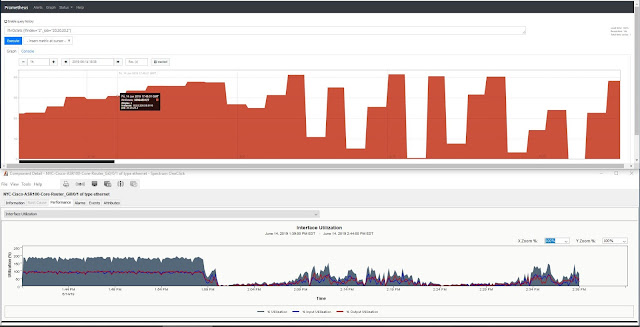 Posted by Gambit Communications at 8:59 AM No comments:

AWS IoT Greengrass is Amazon's IoT edge processing platform. We used their
documentation and other sources [1] with MIMIC MQTT Simulator to setup a
simple control system at the edge to test bi-directional MQTT message flow
(from sensors to control logic, and from control logic to actuator).

For those who'd rather skip to the video, here is the 2-minute Youtube video.

This example illustrates the purpose of IoT at the edge: the processing that does
not need the cloud should happen locally. In this test, everything is occurring at
the edge, we just  added device shadow synchronization to the AWS IoT cloud
for illustration.

You need to setup an account at Amazon AWS IoT. Once logged into the AWS IoT
console, and a Greengrass Group has been created according to their
Getting Started manual. We setup a group called GG_group2 with a core
GG_group2_Core.

Then we simulated our usual bi-directional simple control system at the edge,
with these devices including a sensor sensor_1 reporting telemetry to Greengrass core, running in MIMIC as seen above on the left, with certificates as configured in
AWS on the right.

When the actuator (eg. cooling system) in the control system is off, the sensor
temperature heats, and when it is on, then it cools. We implemented the control
system logic in a Node-RED flow, rather than in a Lambda function. It turns the actuator on if the temperature exceeds a high threshold, and turns it
off if the temperature is cool enough. The connectivity to the core broker is setup
as a subscriber to the shadow updates as shown below on the right: and the Node-RED subscriber is configured to connect to the broker at the edge: with TLS certificates exported by AWS: The parts of the system need permission to publish as defined in the Greengrass
subscriptions:

Once everything is setup, the control system reaches a normal steady state at the
edge, as visualized by the Node-RED graphing rules, as shown in this 2-minute
Youtube video.

We saw that by using MIMIC MQTT Simulator we can create a real-time
scalable, predictable, customized IoT Edge Control System scenario that
compresses the state transitions into a period short enough for showing in
less than 3 minutes.

Future work can improve on this to make it more scalable, test exceptions
(eg. what if the sensor does not cool down when fan is on?), test different
implementations (eg. Lambda function vs. Node-RED), etc.

[1] The Hitchhikers Guide to AWS IoT
Posted by Gambit Communications at 10:52 AM No comments:

If you are planning to attend Cisco Live next week, take a look at a
dynamic IoT platform demo. You will see a cruise ship with dynamic,
real-time cabin temperature and door lock sensors simulated by
MIMIC MQTT Simulator.

Here you see a drill-down to a particular sensor:

Posted by Gambit Communications at 10:09 AM No comments: