EMC has multiple copies of MIMIC Simulator. There is a team of 60 engineers
using MIMIC for scalability, performance, feature and regression testing.

Using MIMIC, they are able to simulate a lab with thousands of switches,
routers, firewalls, load balancers, and hosts from Cisco, Juniper, F5, Riverbed
and many other vendors at a fraction of the cost of hardware. They can also
recreate their customer provided  scenarios to support them better, and
certify newer devices with Smarts.

The engineers use MIMIC’s user-friendly GUI in addition to the scripting
interface. They are able to write scripts in multiple languages (Tcl, Java, Perl,
Python, C++, PHP); they can easily change simulations dynamically and
create interesting scenarios like "interface down" or "core router down", and
test disastrous conditions. They are able to query simulated devices
using SNMPv1, SNMPv2c or SNMPv3, and verify the same information using
command line interfaces (CLI) via Telnet/SSH. They can get the system
configuration using Cisco IOS commands, and then get the same information
using SNMP. They can also generate NetFlow (v5, v9, IPFIX, NBAR) flows.
Since all of these are integrated in MIMIC, they see very consistent data, just
like real devices

For details see our case study. 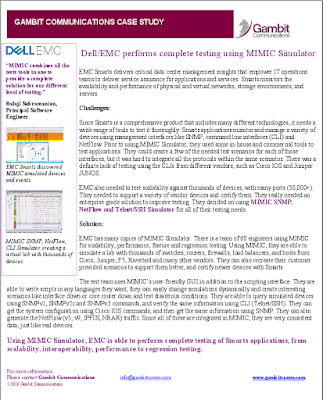 Posted by Gambit Communications at 5:59 AM No comments:

Thinking of feeding MQTT messages of your sensors into an
Elk Stack via a MQTT input plugin?

You could deploy hardware sensors or test clients for your testbed.
Alternatively, MIMIC MQTT Simulator provides a large virtual sensor
network of up to 100,000 sensors per host, so you can rapidly prototype
different types of sensor scenarios and scale up cost-effectively. 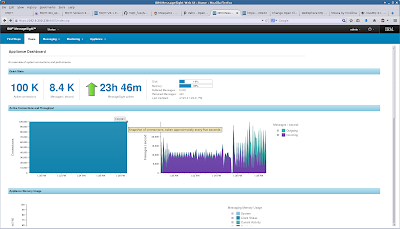 Posted by Gambit Communications at 12:21 PM No comments: