In this one-minute Youtube video you'll see a real-time simulation in
MIMIC MQTT Simulator of a control system with multiple sensors exporting
temperature values to the Samsung Artik IoT platform. The values increase
until a threshold, at which time the platform rule activates an actuator,
causing the temperature values drop. When low enough, the actuator is
turned off. 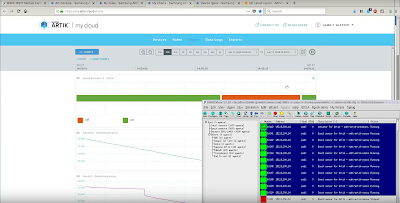 This setup quickly simulates what happens in any kind of control system,
be it a data center with heating computers and fans to cool them, dams with
rising water levels and valves to release the water, pressure inside reactors,
etc.

What is missing in this simulation are backup rules in case the temperature
does not respond as expected. Once implemented, the simulation can
verify any pathological scenario, allowing disaster training, etc.

MIMIC MQTT Simulator can prototype solutions in a fraction of the time of
real systems.
Posted by Gambit Communications at 7:36 AM No comments:

In this one minute Youtube video we demonstrate how it can be done.
We change the temperature values of 5 simulated sensors that are displayed
in the customized Thingsboard dashboard. 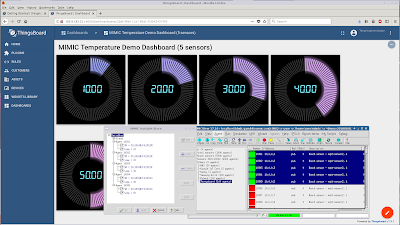 Posted by Gambit Communications at 7:24 AM No comments:

This 30-second Youtube video demonstrates real-time changing telemetry
from a simulated sensor in MIMIC MQTT Simulator visualized in the
Thingsboard dashboard. In MIMIC, what you can do to one sensor you can
do to thousands, if not millions, to allow development, testing, tuning,
training, demonstration of complicated IoT scenarios at large scale. 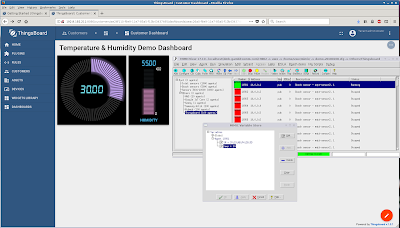 Posted by Gambit Communications at 11:27 AM No comments:

Pubnub has recently updated their MQTT support and we have verified
that indeed it is easy to connect simulated MQTT sensors.

Following those directions we have configured our usual Bosch sensor
simulation in MIMIC MQTT Simulator to publish changing temperature
values and which are detected in a configured function in Pubnub
as shown in the debug console.


This 1-minute Youtube video shows the sensor publishing diverse
telemetry such as acceleration, humidity, temperature, pressure, etc
every 10 seconds. After a couple of intervals we change the temperature
in real-time through the MIMICview GUI from 50 C to 150 C. The configured
function in Pubnub detects the published values and prints them in the
debug console.

What we did interactively through the GUI can be done programmatically
for any number of sensors at will to reproduce any required scenario. 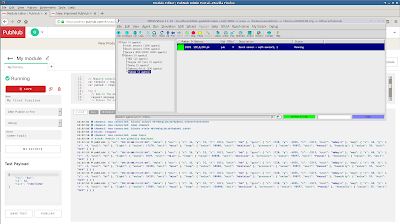 Posted by Gambit Communications at 8:34 AM No comments: