With higher scalability of IoT environments in the face of outsider access
over the internet comes the requirement of proving resilience of your
IoT infrastructure. How do you know your IoT application can withstand
expected, and unexpected loads, recover from faults, and resist malicious
attacks?

Even in the absence of hackers, devices break and misbehave all the time.
How does your infrastructure handle the so-called crying baby, ie. a sensor
publishing too frequently, and how can be assured it does not interfere with
legitimate telemetry?

There are plenty of references about this requirement, eg. this post about
Azure throttling:

" We’re already dealing with serious-scale connectivity when we talk about the
Internet of Things, and we impose the throttling limits on IoT Hub to protect
against what otherwise looks like Denial of Service (DoS) attacks on the
service."

or this Gartner report which contains

"... An IoT solution may be made up of hundreds or thousands of
devices. To test all of the devices in their real environments may be prohibitively
expensive or dangerous. However, you also need to ensure that your IoT
platform and back-end systems can handle the load of all of those devices and
correctly send and receive data as necessary."

Some platforms document their throughput testing, eg. Solace, or throttling
policies, like for Azure and Amazon.  For others this information is hard to
find.

But even if they are documented, throughput is highly dependent on your
specific application profile, and policies are subject to change at any
time, and you will likely run into some problem in production. Unless you
thoroughly tested before deployment, and can rely on QOS guarantees.

To test your specific performance requirements you will need to setup a
test that recreates your specific message patterns, connectivity patterns,
scale, message processing, etc, not just once, but continually.

MIMIC provides a virtual IoT lab with unlimited scale and a flexible,
programmable simulation framework to customize your performance testing.

As a quick example, we did a simple test to run a sensor at 10 messages
/ second to a broker, which ran indefinitely. Then we increased the rate
to 100 messages / second, and in multiple separate tests it was
disconnected after 20 minutes. A look at the packet exchange with
wireshark uncovered an explicit disconnect initiated at the broker.

Posted by Gambit Communications at 11:42 AM No comments:

In our quest for MIMIC MQTT Simulator to interoperate with a wide variety of
Internet of Things platforms and applications we have completed a scenario
where simulated sensors are feeding real-time, precisely controllable
telemetry via MQTT to PTC's Thingworx Industrial Connectivity.

With MIMIC you can simulate end-to-end large numbers of sensors and
actuators to create the complex scenarios for rapid development,
complete testing, thorough tuning and compelling demo and training
of IoT applications like Thingworx.

This 2-minute Youtube video demonstrates how a simulated sensor is
producing arbitrary and precise telemetry as charted in a hosted
Thingworx Foundation instance. This will now be extended to add
edge processing of a large number of sensors. 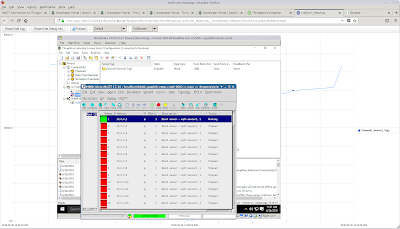 Posted by Gambit Communications at 10:02 AM No comments:

Crouton is an open-source MQTT subscriber dashboard application based on
Node.js . It relies on its own JSON-based protocol layered on top of MQTT to
deliver dashboard features.

We have tailored one of our MQTT Labs to interact with Crouton through any
supported public broker. With it you can quickly explore Crouton features,
since you can customize payloads to the Crouton requirements instead of
low-level coding. Since values are dynamically changeable at runtime, you
can investigate dashboard deployment under a variety of scenarios. By
running many sensors, you can determine how scalable Crouton is. 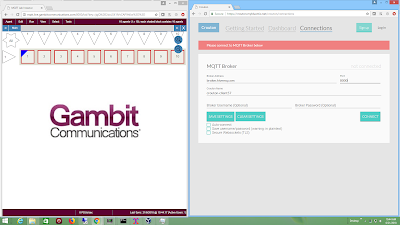 Posted by Gambit Communications at 5:20 AM No comments:

IOTA is *the* DLT (distributed ledger technology) for the Internet of Things.
The facility for distributing telemetry from sensors is called MAM (Masked
Authentication Messaging), for details see their blog.

We were able to transfer dynamically changing MQTT telemetry generated
from our Bosch sensor simulation in our MIMIC MQTT Lab sent to the public
MQTT broker broker.hivemq.com, then through IOTA MAM to the IOTA
tangle in real-time.

You can check it yourself at this online IOTA MAM Explorer,   enter this
string

This is a proof-of-concept meant to show that you can publish end-to-end
any telemetry from sensors to the IOTA tangle in real-time to be consumed
by your IoT application.

You can also check the transactions on the ledger at https://thetangle.org/.

Posted by Gambit Communications at 1:18 PM No comments:

We have recently released this free, online MIMIC MQTT Lab for the
Samsung Artik IoT platform and it is available on the Artik marketplace.

In under 3 minutes you get a virtual lab with a simulation of a IoT
control system based on the MQTT standard. 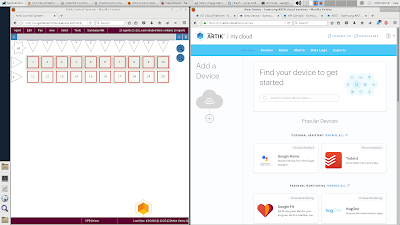 Posted by Gambit Communications at 8:04 AM No comments: