In a previous post we saw how MIMIC MQTT Simulator was used to
generate arbitrary telemetry to the Ignition IoT platform.

In this post we experimented with sending telemetry data with
values in a sine-wave pattern to the MQTT plugin for ELK (Elasticsearch,
Logstash, Kibana).

In the simulation script, the sine wave or a constant value is easily
assigned to accelerometer or gyro values in the lower left window text
editor.

In the ELK illustration, the search engine based application draws the
sine wave as a heat map between peaks and troughs in the upper right
window as steady air current is detected. For comparison, a prominent,
near constant value of banking angle is shown in the lower right window
indicating a calm, windless air condition. 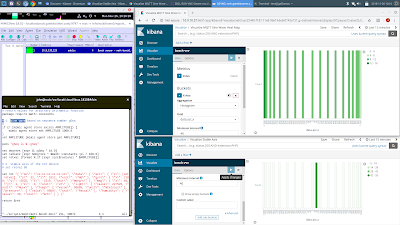 Posted by Gambit Communications at 9:11 AM No comments: