MIMIC MQTT Simulator is simulating 40,000 connected sensors.
The HiveMQ MQTT Broker connected with them as if they are physical
sensors. As shown in the graphs, MIMIC is generating messages at the
rate of around 4,000 messages / second.

In this scenario it has been running for many hours.
The 40001st connection is a third-party subscriber client. This shows
that MIMIC simulated sensors are no different than the real one.

MIMIC allows you to stage precise pre-deployment tests for HiveMQ and
other IoT applications to make sure they handle the expected load and
provide the needed performance. In addition, you can easily customize
message payloads of simulated sensors for rapid prototyping, and create
pathological scenarios to minimize risks. 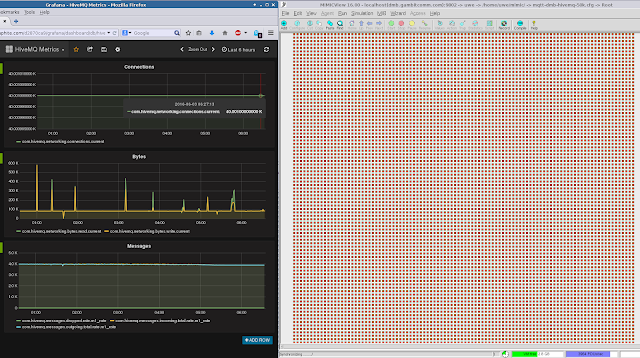 Posted by Gambit Communications at 7:38 AM