Node-RED and 1000 simulated Sparkplug B sensors

In a previous post we discussed a technique to reduce the number
of tracked telemetry in the Node-RED IoT application, which only graphed
interesting temperature values from 20 simulated Bosch sensors.

In this experiment, MIMIC MQTT Simulator is simulating 1000 Sparkplug
sensors sending telemetry to Node-RED, graphing 10 of them in real-time.
We notice that each sensor has unique, expected telemetry. 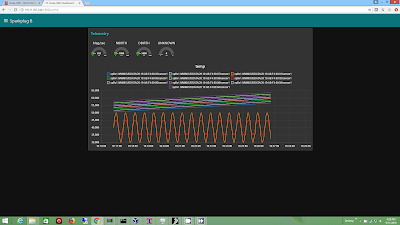 This open-source Github repository has the flow source code to generate
these graphs. 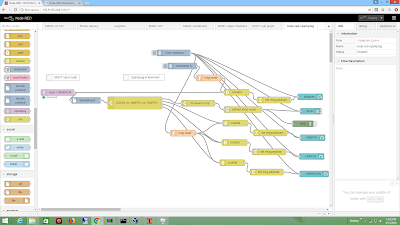 The MQTT input node sends messages to a decode-protobuf node, which
decodes the Sparkplug messages coming from the simulated sensors and
passes them on as JSON message objects. The next node switches between
NBIRTH / DBIRTH / DDATA messages. The first 2 just count the arrivals. The
DDATA messages are graphed only for the first 10 sensors, else there would
be too many lines in the graph. Unknown messages are counted as well.
We implemented a simple message performance instrumentation by
resetting the message count every second.

Posted by Gambit Communications at 9:55 AM