The traditional anomaly detection scenario involves detecting unusual
behavior in a vast sea of normal data. To empirically test your anomaly-
detection IoT application requires you to setup a large environment of
sensors sending data to your Google Pubsub application.
To do this in real-time to verify response time constraints is specially hard
to do.

To demonstrate how simulation can simplify this task, we improved on the
Google Cloud IoT Core End-to-end example tutorial by making 10 lines of
code change to their pubsub Python server code.

The changes merely count the number of devices detected (by their
serial number), and the anomaly is detected if any temperature value
exceeds the threshold, printing a WARN message.

When we start 10 simulated sensors in MIMIC MQTT Simulator configured
to connect to Google IoT Core, they are detected by the listening Pubsub
application. We can then change in real-time the temperature of one of them,
causing the pubsub application to detect the exceeded threshold.

This 1-minute Youtube video shows the entire demo in real-time.

We then used their Python manager client to define 90 more devices for
a total of 100. Then we ran the same scenario again. Notice the lag between
when the event occurred and the detection by the Pubsub application.

Here we show the entire demo in this 1-minute Youtube video. 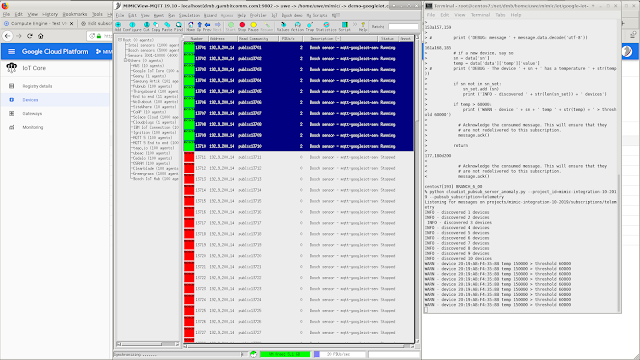 Posted by Gambit Communications at 11:05 AM