Our minimal standard for a scalable, real-time, dynamic, bi-directional
demonstration of an IoT platform is:

- multiple devices, at least dozens, preferably thousands (it is easy to
provision a few devices, not so easy to provision many);

- arbitrary telemetry (for heterogeneity, the devices dictate the payload,
not the platform);

- easy rules to control your environment, preferably with no programming;

- real-time processing, preferably at the edge;

- bi-directional flow: telemetry generated by sensor-type devices, commands
accepted by actuator-type devices
For this we have come up with a minimal pattern of a control system
like that of a data center with equipment that heats up, causing sensors
to generate telemetry with rising temperature, and a cooling system
controlled by an actuator, to cool them down. The control system receives
temperature values from many sensors, which if any of them cross a high
threshold, turns the cooling system on. Once the equipment cools down
beyond a low threshold, it triggers the actuator to turn off. In the steady
state, the temperatures reported will go up and down predictably.

We have implemented this demo on third-party platforms, like
Samsung Artik  or IBM Watson.

In this post we detail the demo setup for the Losant platform as shown
in this 1-minute Youtube video:

- we setup 2 device recipes, one for our sensors and one for the actuator;

- the payload cannot be arbitrary, but must conform to Losant's template;

- once we configured the authentication parameters to our application
context, the devices were able to interoperate with Losant
This screenshot shows the telemetry generated by one of the sensors. 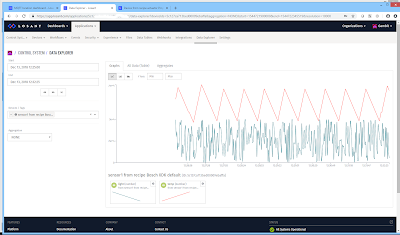 The light value changes randomly, like that of a flickering light. The
temperature value rises and falls within the thresholds. The following
screenshot shows the workflows that control the actuators: 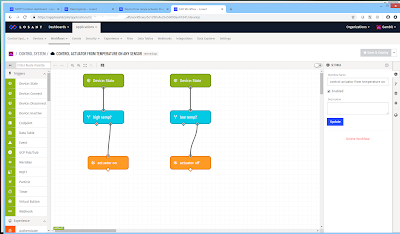 Once the steady-state works, we can implement and test rules that handle
pathological scenarios, such as the equipment not cooling down.


Posted by Gambit Communications at 10:32 AM